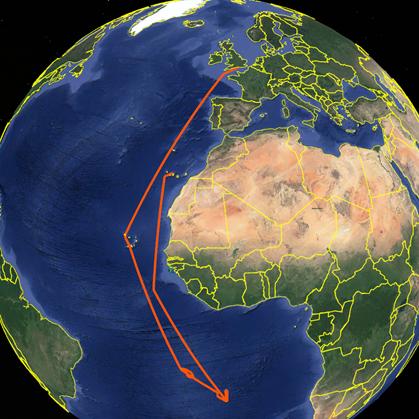 In November 2022, Blue Belt Programme scientists and key partners will depart on a 9000 mile expedition to Ascension Island and St Helena in the South Atlantic Ocean. We will spend 10 days around each island, conducting scientific surveys and collecting data. A main objective of the expedition is to collect new scientific data on how key habitats and species found within the biodiverse and near pristine Exclusive Economic Zones (EEZs) and Marine Protected Areas (MPAs) of both islands function. This increased knowledge will help inform the development of future sustainable management and conservation strategies. Habitats of interest for the expedition will include previously uncharted hydrothermal vents, the Atlantic mid-ocean ridge and a number of unexplored seamounts. These different habitats support a multitude of important species, including cold water corals, tuna, billfish and sharks. Areas previously surveyed will also be revisited. By doing this, we can collect time-series data which will allow scientists and managers to begin assessing any changes identified and relate them to the effectiveness of existing management strategies.